The arrival of a cicada swarm is often compared to a Biblical plague. Seemingly overnight, an area can be overwhelmed with thousands, if not millions, of flying bugs that seem to be everywhere.

But unlike Biblical plagues, cicada swarms do little damage to the environment when they reach adulthood. Instead, these insects are most well-known for an intense, loud mating call … and for scaring people with their creepy appearance.

WHAT ARE THE CICADAS DOING?

When cicadas emerge from the ground, they have only one thing on their mind – mating. Male cicadas settle down on tree branches where they emit an ear-splitting noise meant to impress female cicadas. In some species, this mating call can reach 120 decibels, which is about as loud as an in-use chainsaw. North American cicadas seem to max out around 110 decibels, which is comparable to a steel mill in full operation. Despite this ear-splitting noise, humans often find it difficult to determine the direction of a cicada call.

The male will die shortly after mating. The female, however, lives on to lay her eggs. In most species found in North America, the female cicada cuts a slit through tree bark and then lays her eggs inside. Once she completes this task in several locations, she too dies.

Their offspring hatch shortly thereafter, drop to the ground and bury themselves, where they can remain underground for years.

WHERE ARE CICADAS APPEARING?

In general, some cicadas appear yearly in every region of the United States. Massive outbreaks, however, develop at the end of certain broods’ periodic cycles and those outbreaks are regional in nature.

In 2016, the periodic group called Brood V is emerging in Maryland, Ohio, Pennsylvania, Virginia and West Virginia. The following year, 2017, will hail the arrival of Brood VI in Georgia, North Carolina, and South Carolina. New York will see the big outbreak of Brood VII in 2018. Another group, Brood VIII, hits Ohio, Pennsylvania, and West Virginia in 2019.

Like most insects, cicadas seem to prefer specific types of plants to roost upon and lay their eggs. Cicadas in North America are attracted to these plants: 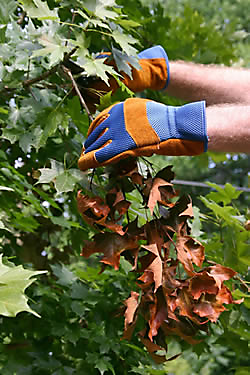 These plants, if young or weakened by disease, can be damaged by cicadas, but most weather the cicada swarms. However, certain parts of these plants may experience a condition called flagging, when the leaves at the tips of host branches turn brown.

WHY ARE CICADAS SO DISGUSTING? 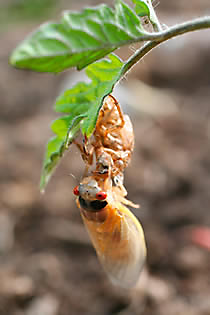 When it comes to appearance, cicadas are the stuff of nightmares. These large housefly-shaped insects have a sickly, caramel-colored exoskeleton and transparent wings with veins sprouting from their thorax. Their foremost pair of legs is especially long, which helps them cling to tree limbs. Hidden on their underside is a long tube protruding from their head, which they stab into plants in an effort to suck out the plant’s nourishing juices – their only food source during adulthood. To top off that interesting collection of body parts, most cicadas have red eyes – not red-tinted eyes either – their eyes are literally fire engine red! In fact, it’s easy to confuse a cicada for a June bug, since they appear around the same time and both are about the same size. That being said, cicadas are definitely a lot uglier.

Beyond their horrid appearance, lots of dead cicadas can create a foul stench. In areas where there’s been a major emergence of these insects, the millions of cicadas all die around the same time and then fall to the ground. As their bodies begin to rot, the smell gets worse. If you see this happening in your yard, it’s a good idea to rake up the corpses and bury them in a hole. Composting them is another option.

About a month and a half to two months after the big die-off, the next generation of cicadas hatches. These cicada nymphs, usually white in color and about ¼ of an inch long, quickly go underground.

WHEN DO CICADAS GO AWAY AND WHEN WILL THEY COME BACK?

Scientists believe that, on emergent years, cicada nymphs leave the soil when temperatures reach 65° F about 8 inches below the surface. After finding a tree to rest in, they molt one last time and emerge as adults. At this point, adults live about four to six more weeks before dying off.

The amazing part about periodic cicadas is that some species will stay underground for 13 years and others will stay underground for 17 years. Scientists find it interesting that both these periods are prime numbers and suspect that there is some biological molecular clock that counts off the years for these insects. In a sense, that’s good news -- if you have a major cicada outbreak this year you won’t have to worry about another outbreak for more than a decade!

Why are their emergent years set so far apart? Again, scientists have a theory – they believe it’s to keep predators from relying on these fat bugs as a food source.

Of course, not all cicadas have such a well-tuned biological wristwatch – some will emerge from the soil in the wrong year for their particular species or brood.

Other species, as we mentioned above, emerge from the soil on a more regular basis. These cicadas are usually parts of broods that are on cycles as short as once every two years. These smaller broods are so indistinguishable that many people assume they are on an annual cycle.

HOW CAN I FIGHT CICADAS?

One of the best ways you can battle cicadas is by enticing cicada killer wasps into your yard. These wasps, which don’t normally sting people, are on the large side – measuring about 2 inches long.  Of course, not many people are eager to have two-inch-long wasps in their yard either!

Birds and other wildlife are also opportunistic cicada predators. What cicadas lack in good looks, they apparently make up for in good eating! As with any large insect, cicadas offer a protein boost to anyone willing to eat one. Even humans will eat cicadas – there are plenty of recipes available online!

Beyond finding predators to eat your cicadas, it’s probably easiest to wait them out. With their short, above-the-ground lifespan, cicadas are a minor annoyance at best. 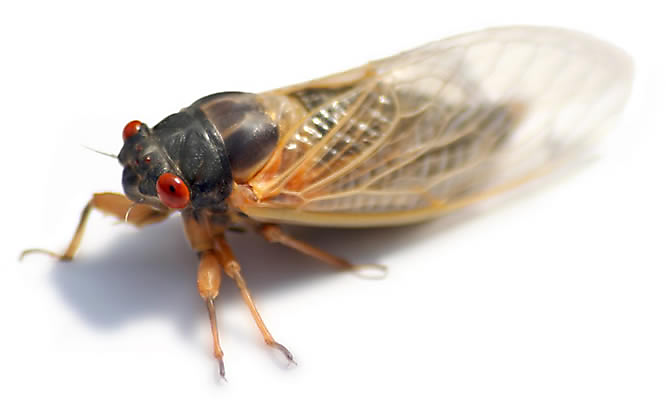 Join the TERRO® community on Facebook, where we regularly offer ideas on pest control and run contests where you can win free stuff. Also be sure to check out the TERRO® eNewsletter for more helpful articles like this one and exclusive updates on the pest control products you need.