While slugs aren’t insects, they can be major pests for gardeners and homeowners. These slimy creatures can infest a garden and be so pervasive in your lawn that you don’t want to step outside at night. Learn all about slugs and how to eliminate them from your property.

What Are the Signs of a Slug Infestation? 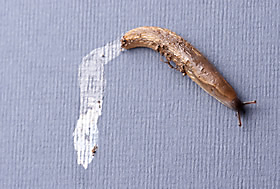 A slug infestation is fairly easy to recognize. These are the most common clues that point toward slug activity:

If you want further proof, head out to your garden at night with a flashlight and look for them. They aren’t shy, so they’ll continue to munch while you observe them.

How Can I Control a Slug Infestation?

There are several methods for controlling a pre-existing slug population. Performing these tasks can significantly reduce the number of slugs in an area over a period of time.

How Can I Get Rid of Slugs?

I Picked Up a Slug and Now My Fingers Are Slimy. What Do I Do? 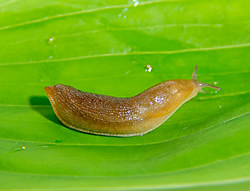 While it may seem like a good idea to wash off slug mucus, don’t do it! Their mucus reacts with water, causing it to spread. Instead of washing it, rub your hand and fingers together. This causes the mucus to ball up (much the same way as rubber cement would), and it is then easy to pick off your skin. Once you’re satisfied that you’ve pulled up the slime, you should then wash your hands for sanitary reasons.

Can I Pour Salt on a Slug to Kill It?

Pouring salt on a slug will kill it in a matter of seconds, however, it generally takes quite a bit of salt to do so. The salt kills the slug through osmosis – it draws water from inside the slug and rapidly dehydrates it.

The problem with this method is that the salt can damage the nearby soil, leaving it unusable for planting for years to come. Salt can also damage other surfaces the slug may be crawling on, including wood decks, tiled floors or painted surfaces.

How Can I Stop Slugs From Entering a Flowerbed?

The best way to keep slugs out of an area is to stop them early in the season.

In the early spring, rake your flower beds and ornamental plants to remove leaves and other debris. This will also disturb and remove slug eggs at the same time.

Also work to remove any areas where slugs can shield themselves from the sun. Remove boards, flat rocks and other objects where slugs hide. Even large pieces of mulch can protect a slug. Likewise, don’t pile mulch more than 3 inches high.

An immediate option for keeping slugs out is to sprinkle diatomaceous earth around the border of the area. Slugs do not like to cross over territory covered with a rough or sharp texture that diatomaceous earth creates. An even better option is to sprinkle TERRO® Ant Dust around your ornamental plants. This will kill slugs and many other harmful plant pests, including ants, crickets, cockroaches, ticks and wasps.

Folk remedies suggest protecting your plants with a ring of crushed egg shells or sand, but this doesn’t work. In fact, snails appear to be attracted by the smell of eggs, and sand doesn’t bother them (unless they’re stuck in a desert). Coffee grounds and copper strips, two other commonly suggested folk repellents, don’t work either.

How Can I Keep Slugs From My Pet’s Food?

Slugs will invade food bowls left outside overnight. Your best bet is to simply remove the bowl after your pet has finished eating and clean up the debris. Slugs have a great sense of smell, and kibble appears to be one of those food items they will seek out.

Further, removing outdoor food bowls is a good idea for more than just preventing a slug problem. By leaving a food bowl out, you may attract even worse pests than slugs to your home!

Are There Different Kinds of Slugs? 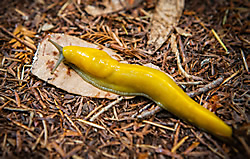 There are dozens of slugs native to North America as well as several invasive species that have established a firm footing here. These are just a few of those species: