Twas the Night Before Christmas

Inspired by the Clement Clarke Moore poem Twas the Night Before Christmas, and in the spirit of the holiday season, we wanted to take a moment to share our own ant-inspired version of this classic poem!

Twas the Night Before Christmas
Courtesy of TERRO® 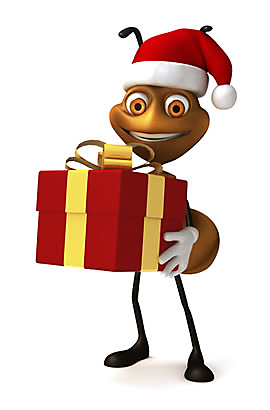 Twas the night before Christmas, all snug in our nest,
Not a creature was stirring, not even a pest.
Santa left cookie crumbs on the floor just so,
Nearby ants shouting “Look at this feast – whoa!”

The dog was all nestled in his dog bed nearby,
With dreams of chasing ants, nimble and spry.
And mamma in her ‘kerchief and us in our caps,
Unaware of the ants looking to eat Santa’s scraps.

When out on the lawn there arose such a clatter,
The ants coming in looking for some cookie batter.
Away to the window we flew with a flash,
Tore open the shutters and threw up the sash.

We couldn’t see what would’ve caused such a clang,
For the ants were too small, despite such a large gang.
When, what to my wondering eyes should appear,
But our dog running ‘round – why this behavior? Unclear.

With little worker ants so lively and quick,
The ants tried to maneuver around our dog, Rick.
More rapid than eagles the swarms of ants came,
They dodged and then swerved – made a cookie hunt game!

"Now Rick! Now, doggie! Now, pooch and friend!
Come up to bed – this running around madness must end!
To the top of the steps! To the end of the hall!
Go to bed now so asleep we can fall!"

With the dog upstairs the ants said good-bye,
Nothing stood in the way of their dream in the sky.
So over to the cookie crumbs the worker ants flew,
With their bellies empty and rumbling too.

And then, in a flash, they called to their friends
Follow my trail… at the cookie crumbs it ends.
They filed neatly in line, and each took a bite,
To the nest they went to share in delight.

Mamma was first down the stairs, awake from her sleep,
Making sure all was in order, down the hall she did creep.
When she got to the kitchen she let out a yelp,
“Papa get down here – we’ve got ants – HELP!”.

Papa crawled out of bed thinking Mamma had gone mad,
As he reached the kitchen he too realized… it was bad.
He took in the scene seeing ants here and there,
And decided now was not the time for despair.

He thought of the TERRO® liquid ant bait,
And decided to act before it was too late.
He wanted to fill the little ants’ belly,
With the bait tasting like a bowlful of jelly!

They’d be chubby and plump, right jolly worker ants,
And share the bait with the others as if in a trance!
The whole time they’d think we were feeding them all,
Not suspecting the bait will be the source of their fall.

Papa spoke not a word, but he did watch with care,
As the ants ate the bait and quickly they did share.
Satisfied with the method of defense that he chose,
And giving a nod, his spirits, they rose!

He sprang to hall, and woke us kids with a whistle,
And down the steps we flew like the down of a thistle.
Mamma and Papa yelled, soon these ants will go away,
"Happy Christmas to all, and to all a good day!"

Merry Christmas from the TERRO® team! We wish you and your family a fANTastic holiday season!