Up In Arms Over Centipedes 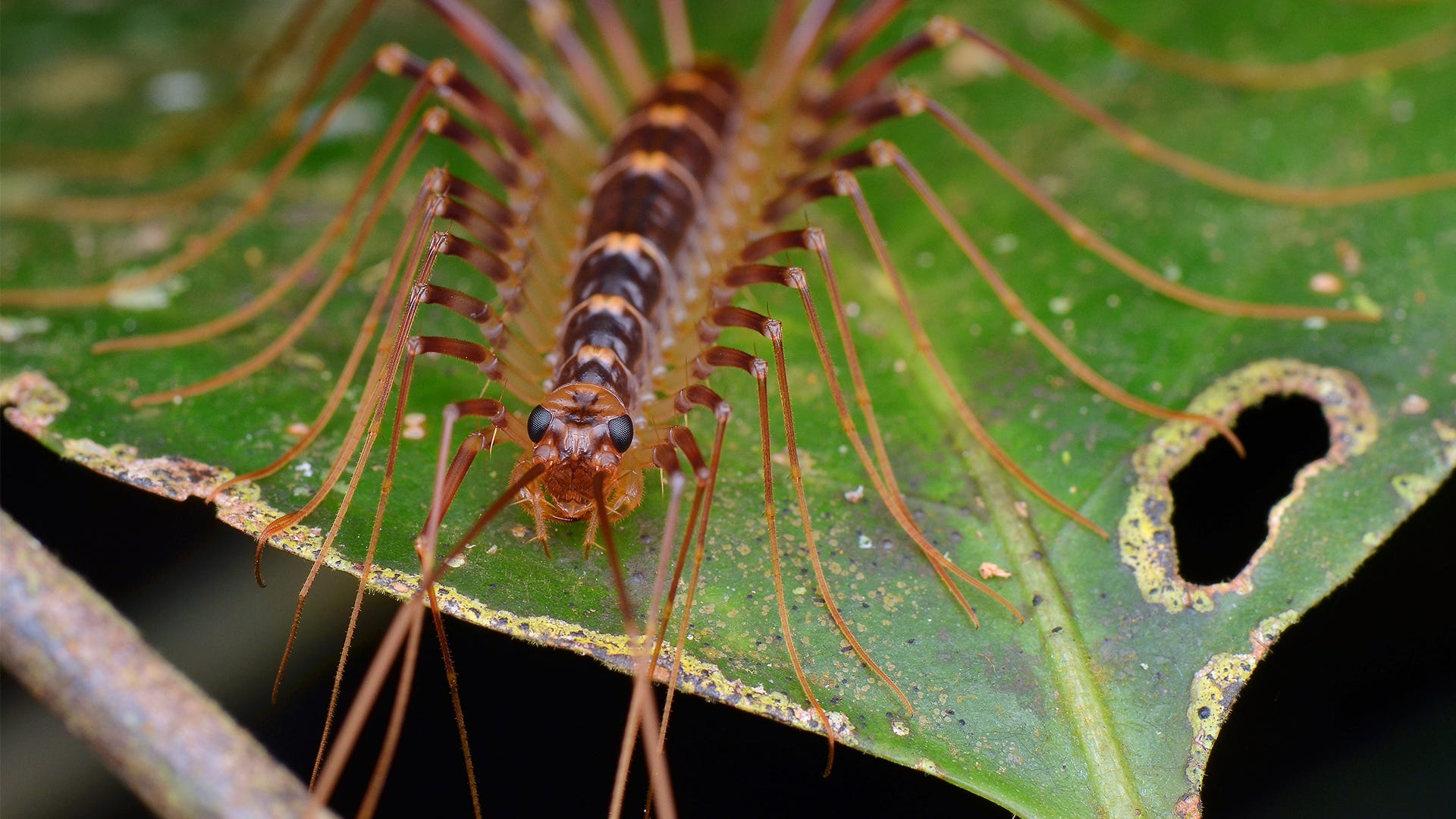 It’s late, you haven’t turned on any of the lights, and out of the corner of your eye, you spot a long, skittering shape dash across the floor. You’re startled and may even scream, flicking on the lights to see a long mutant spider covered in legs freeze on the floor. It turns to you slowly, and then dashes forward to make a quick meal of your toes!

While it sounds like the start to a bad slasher flick, the truth is almost more unpleasant: you’ve just had a run in with the unbelievably quick, Olympically agile, and born of nightmares centipede. A creature that frightens spiders and makes wasps look like pacifists. So what, exactly, are centipedes, and why are they so frightening?

Named for having 100 legs, a centipede’s body is composed of multiple segments, each of which has a pair of limbs. Your typical insect has what amounts to a head section, a midsection, and an end section, but in the case of the centipede… it just kept going, and continues to increase the number of segments they have as they get older. Not all species reach the lofty 100 legs mark; however, among the different kinds of centipedes out there, you can find anywhere between 30 to 234 limbs!

All those legs don’t go to waste, either. In addition to providing incredible locomotion, centipedes have evolved unique use of some of their limbs. In addition to their rather impressive set of jaws, they’ve evolved a set of forward-mounted legs that are fitted with fang-like stingers, giving them twice the biting power as any other creepy crawly! Not stopping there, the centipede’s antennae are also legs with sensory organs slapped in them, which most of them use instead of their eyes. In fact, all centipedes have notoriously bad eyesight, and some are just blind altogether!

Most centipede species are a couple inches in length, but some tropical varieties can reach several feet long. They’re covered in tough chitin, which makes them very durable. The centipede weakness is their lacking the protective waxy coating other bugs have, which helps to maintain moisture. That means that they are prone to dehydration, and must stay in moist environments.

Where Do You Find Centipedes In Your Home?

Centipedes are nocturnal predators, and while sometimes you can find them scurrying about during the day, a vast majority of the time, they’ll do their dirty work unseen. However, unlike most bugs out there, they don’t have free rein to live where they please, because of their weakness to arid and dry environments. For instance, if you’re in a garden, the first place you can find a centipede is under a rock, where moisture is retained. So if you find some centipedes making your home their residence too, a couple of places to look for them include:

How Dangerous Are Centipedes?

Centipedes, while scary, are not normally considered dangerous. Their poison is potent enough to kill insects or even small mammals, but not potent enough to affect people, unless they have a history of allergic reactions to insect stings. If that is the case, or if the victim is a very young child, it’s important to get help immediately.

For those of us who aren’t susceptible to their poison, our biggest worry is their highly aggressive nature. Like a wasp that woke up on the bad side of the nest, they’ll fearlessly chase you down and sting you viciously.

Their bite can be painful and, unlike spiders, killing them is not as easy as a quick drop of the shoe: their full plate chitin armor makes them incredibly durable, and anyone who has had tried to squish one will agree that once under the boot you have to grind them to death, as a good ol’ foot stomp just doesn’t do the trick.

How Do You Deal With Centipedes?

Like most predatory creepy crawlies, one of the best ways to deal with them is to eliminate food sources. Any tactic you can use in order to eliminate other insects in your home will put an end to the centipedes’ food supply, and even if they like the idea of scaring you in the dead of night, they won’t stay long if there isn’t anything to eat.

If the indirect method of cutting off their food supply and starving them out isn’t working, then try some of these methods:

The Result Of The Arms Race

At the end of the day, as terrifying as the Centipede can be, it falls into the same category as the spider: an unpleasant addition to our lives, that more often than not, is actually doing more good than harm. They eat the bugs that infest our homes, and once they’re done, move on their way.

While that might mean they simply return to the garden or lawn from whence they came, with a couple of household bug remedy tricks you can keep the centipede sightings to a rare-to-never occurrence!