Hornets and wasps are found nearly everywhere throughout the United States, and they have the potential to be very dangerous pests because they attack in large swarms when they feel that their homes or territory are under threat. Insect colonies of this type commonly build seasonal nests near people and pets: on roof awnings, in trees, in abandoned structures, inside or under pet houses, under leaves – virtually anywhere that seems safe, secure and tucked away from direct harm. It is often the case that people don’t even know that they are near a hornet or wasp nest until it is too late, because these insects are superb at concealing their homes from danger and responding quickly to threats. It is for these reasons that extreme caution and proper safety measures should be implemented when choosing to personally dispose of hornet and wasp nests. 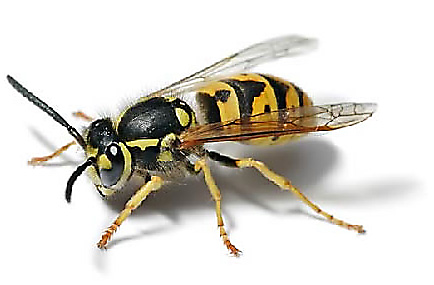 When a nest is threatened, hornets and wasps become extremely aggressive and swarm in large numbers to defend their homes. While their bite and sting are considered non-lethal to most people, the sheer number of stings have contributed to incidents involving shock and death. For this reason, people who have allergies to insect stings should not risk removing a hornet or wasp nest, and should instead seek the help of a professional exterminator. There have also been numerous cases of reported injuries involving people who have fallen off roofs and ladders while being swarmed, so it is very important to know all the common risks involved when dealing with nest removal and to be as safe as possible. 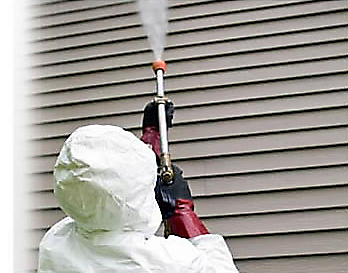 Since hornets and wasps attack in swarms, it is important to do all that you can to decrease your chances of injury when trying to dispose of a nest. First and foremost, make sure to wear the best protective gear available. Any open skin contact has the potential of being bitten or stung, so wearing thick gloves and clothing that conceal areas like the waist, wrists, ankles and the neck greatly reduces injury. Wearing goggles and a mask will not only protect the face from bites and stings, but they will additionally protect sensitive areas like the eyes, mouth and nose from harmful kill-on-contact pesticide spray drift.

Apart from wearing good, protective clothing, the time of day to plan an assault on a nest is also something to take into close consideration. Hornets and wasps are extremely active and aggressive during the day, so it is best to deal with nests early in the morning or late evening. The cooler temperatures during these hours make the insects less active, and they, like many living organisms, rest when it’s dark out. Try to determine the location of the nest (especially the openings) from a safe distance during the day when it’s light out, and then plan the attack and disposal of the nest early in the morning or late in the evening when there is little to no insect activity.

Using a reputable pesticide for hornets and wasps that kills on direct contact and has long range application works best at getting rid of insects and offering protection to the person. These pesticides generally come in pressurized cans and can shoot an accurate stream up to 30 feet. The distance of the spray not only targets hard-to-reach nests, but it also serves as a safety precaution that increases the amount of space between a person and a nest, allowing for a safe escape should a colony suddenly swarm. The long stream of pressurized pesticide should also decrease the need to climb on ladders and roofs to reach a nest, reducing the risk of falling injuries.

Buying and using professional pesticides is one of the most effective methods for the termination and removal of nests. Products like TERRO® Wasp and Hornet Killer are available at most grocery and hardware stores and will kill pests on immediate contact by penetrating the exoskeleton and delivering poison directly to the insect’s organs. Once a nest has been thoroughly sprayed with a pesticide, it is best to leave it alone and return to remove it the next day. If there are any surviving hornets or wasps, they will return back to the nest and the residual effects of the spray will eliminate those insects as well. Wait 24 hours to ensure that all of the insects are dead, at which point it is safe to knock down and dispose of the nest. Be sure to put the nest in a sealed bag that can be thrown away or burned. 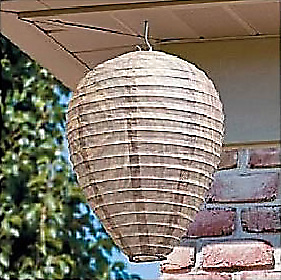 Surviving hornet and wasp scouts frequently return to areas where a previous nest existed, so it is important to take the following factors into consideration in order to reduce any returning colonies. Like all living organisms, hornets and wasps are attracted to regular food sources, and too often, our own garbage and leftover pet food is all it takes to lure them near our homes. Keeping food sources sealed and inaccessible to hornets and wasps plays a key role in detouring them from claiming our homes as their own territory. This can be as simple as sealing up all trash bags and keeping lids on the garbage cans. Because hornets and wasps are attracted to protein, it’s also important to not leave leftover pet food out and accessible for these pests. Keeping pet food indoors, or cleaning up any uneaten food on the ground outside, helps to keep hornets and wasps away.

It is sometimes even necessary to change the look of the environment where previous nests existed because scouts remember old territories by sight. By cutting tree branches, patching up holes or hanging up new decorations, returning hornet and wasp scouts will be unable to relocate their former territories. In some cases, people have even hung up faux wasp nests to detour returning scouts and make them believe the territory has already been claimed.

Gardening Know-How - How to Kill Wasps

Do Your Own Pest Control - Wasps

How Stuff Works - How Wasps Work