The store will not work correctly in the case when cookies are disabled.

Whether witnessed during vacation or on a strange television food program, the consumption of insects has sparked many of our curiosities. Humans consume a wide variety of insects every day, and some people around the world even depend on insects when staple foods are in short supply. The Western world hasn’t fully jumped on the bandwagon, however; and while we’re not quite at the stage where a platter of crickets is served up at family gatherings, you may be surprised to learn it’s possible for one person to ingest nearly 140,000 pieces of insect matter each year.

This is due to the nature of food production and the regulatory standards of the Food and Drug Administration (FDA), which allows for a small amount of insect material that is guaranteed safe for human consumption to pass into our food. The FDA collects a wide array of different food samples and tests for the presence of insects (or other defects) to make information public and ensure the safety of our food. Otherwise, resource costs would be too unmanageable to eliminate all defects from food production.

Although this situation might offset some people at first, a bit more information might convince you it’s a relatively normal and completely safe phenomenon.

The number of insects or insect fragments allowed by the FDA depends on the food in question. In general, foods that are consumed whole, such as fruits and vegetables, have a lower allowable limit than processed foods, such as spices, flours, and sauces. It follows the nature of production that, in general, processed foods yield more insect fragments, while whole foods contain more complete insects. For example, canned or frozen berries are only allowed to have two insects per 100 grams (roughly half a cup), but hops – used mainly in beer production – can have as many as 25,000 insects in the same measurement.

It’s crucial to note each consumable typically deals with a different insect, insect fragment, or other insect contamination. This could range from small insects (like aphids or thrips) to larger varieties (like beetles or mealworms). Other defects could include fly eggs or beetle sacs. It might be jarring to imagine 25,000 bugs in half a cup of hops, but remember these are only aphids, which are a mere 2 to 5 millimeters in size. A contamination level as high, while still considered safe, would be a worst-case scenario. 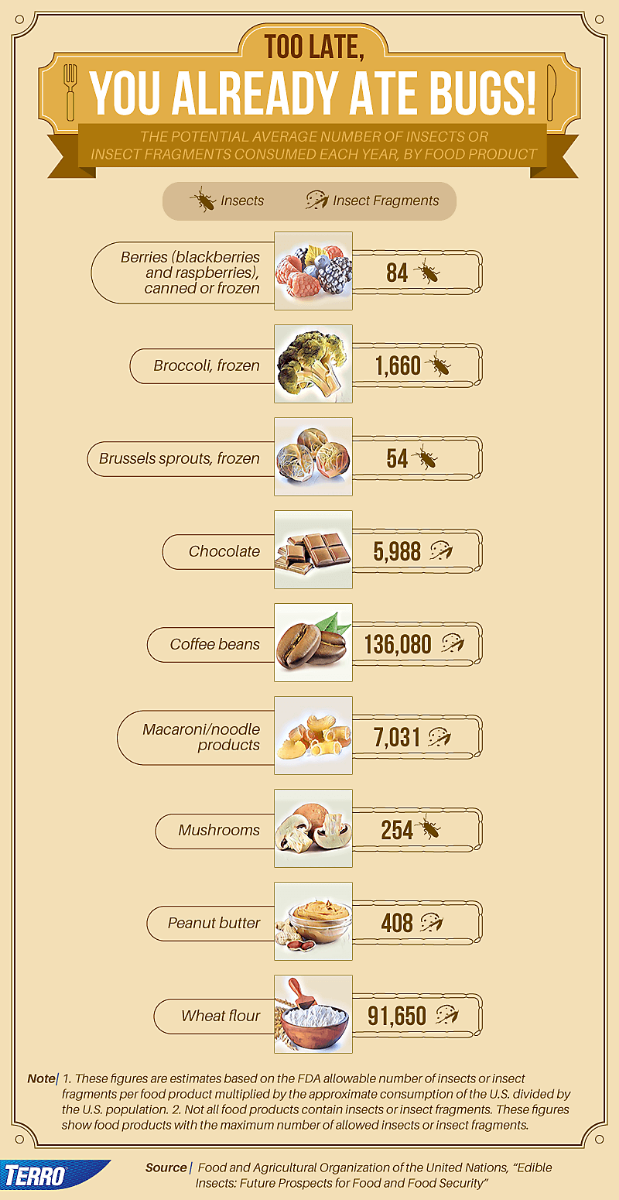 Almost everyone has heard about eating spiders in our sleep. While it’s a pretty rare occurrence, it’s not at all unusual for people to inadvertently consume insects every day. Some of the most common staples of our diet can contain levels of insect contamination that might seem shocking, even though they have been determined safe for consumption.

Combining the FDA’s data on allowable bug content with yearly consumption rates of certain foods, we can get a feel for how the situation breaks down in our everyday diet. The average coffee drinker could technically take in almost 140,000 insect fragments a year. If you eat broccoli regularly, you could be adding over 1,600 aphids to your diet. Even the chocolate you eat could, in a worst-case scenario, lead to you eat nearly 6,000 insect fragments a year. Beetles, worms, and thrips need to eat too. Bugs are simply a part of the food production process.

Now that you’re comfortable (or not) with your unspoken relationship with insects, it’s time to address the details about which bugs might make an appearance in your daily food intake. Again, it’s important to remember the FDA deems these levels safe.

Aphids eat plant sap and are notorious for infesting gardens, crops, or any congregation of plant material. As such, they make their way into foods like apple butter, berries, broccoli, Brussels sprouts, and hops. Frozen broccoli and hops are also known to be a favorite for a variety of worms, beetles, and mites. Thrips and whiteflies find their way into canned citrus juices, while pollu beetles, mealybugs, thrips, and tingid bugs often get into ground pepper. Avoid reading this part during a meal: Cockroach fragments can be found in both coffee and chocolate.

If you think animal proteins are the most efficient way of getting your body the nutrients it needs, think again. Many insects have relatively high protein content when compared to the same quantity of chicken, beef, or salmon. It’s no wonder around 80 percent of people worldwide eat one or more of roughly 1,700 edible insects as a source of protein or as a replacement for animal protein when unavailable. While the idea of eating a half cup of larvae or roaches might seem unappealing to some, the level of nutritional content packed into insects shouldn’t be undersold.

Of the insects looked at, mealworms, crickets, and houseflies boast the highest protein. Although none of the bugs here quite reach protein levels as high as lean ground beef, mealworms beat chicken by nearly 3 grams, and crickets only fall short by half a gram. Protein isn’t the only nutrient in question, though. Insects contain a ton of vitamins and minerals as well, which, in some cases, dwarf the amount found in animal protein. Black soldier fly larvae contain just over 934 milligrams of calcium to the meats’ 12 or 13 milligrams each, and every class of insect listed (excluding earthworms) has more magnesium than chicken, beef, or salmon. All considered, maybe the FDA is doing us a favor by allowing insect matter into our food.

While it might be unsettling to realize insects ultimately end up in the food we eat, many cultures across the world eat them whole as a part of their overall diet. In some cases, a seasonal lack of wild game requires people to seek nutrition elsewhere, while in others, insects are considered a delicacy. Every landmass that isn’t covered in ice has some edible insects, and considering 2 billion people are already fine with eating bugs, why hasn’t the West embraced entomophagy yet?

Mopane caterpillars, often gutted and dried, are a standard item in many local markets across South Africa. The red palm weevil is native to Southeast Asia, but its larvae are eaten all over the world grilled, fried, or dried. If it’s the right season, you’ll even find some Ecuadorians eating beetles. If any justification is needed, some even argue eating insects is a sustainable path to address the world’s food shortage problem. So next time you’re thinking about going for Thai, consider cracking open a beer and frying up some crickets with soy sauce instead.

bugs that are popular grub

Not all insects are created equal in the world of entomophagy. Although most insects are indeed edible, some classes are much more commonly consumed than others. Of course, any survivalist will tell you to stay away from brightly colored bugs, but here’s a breakdown of the most consumed insects throughout the world if you’re ever in a pinch or are just curious.

Of all insect classes, beetles are eaten the most often. They are also the most common type of insect out there. Behind them come butterflies and moths, which are just about only consumed as larvae (or caterpillars). Bees, wasps, and ants are eaten more commonly than grasshoppers and crickets by a small margin. Cicadas, aphids, and planthoppers make up 10 percent of the world’s eaten insects. And termites, dragonflies, roaches, and various flies, account for less than 15 percent.

Due to the situation at hand, the U.S. might be considered, by a stretch, entomophagous. If insects aren’t eaten as a conscious decision, then they’re surely ingested from time to time as a harmless consequence of our food production and regulatory systems. It’s certainly nothing to be ashamed of – we would be sharing in a practice most of the world already participates in.  Besides, the data tell us we could see a marginal boost in our protein and vitamin levels from insect consumption.

If this information hasn’t convinced you to branch out and try entomophagy in its purest form, hopefully, it has at least reassured you eating bugs can be both safe and normal. However, an insect infestation in your home is not so easy to stomach. Terro has been on the cutting edge of insect control innovation since 1915, and their well-known products will ensure that no insects come into your house uninvited.

The two main sources used to compile the data for this campaign were the FDA Action Levels Handbook and “Edible Insects: Future prospects for food and feed security,” an article published by the Food and Agriculture Organization of the United Nations.

To visualize the allowable insect matter by food product, we normalized each food product to a per 100-gram measurement. In doing so, we listed the average allowable insects or insect parts per the FDA handbook. These action levels are not averages of actual insect parts found in the food, and food manufacturers are encouraged to stay well below the action level. However, it is possible for food manufacturers to distribute commodities with this number of insects and insect parts, and from these levels, we calculated how much insect matter an American person could be consuming when they consume these various food products.

To find the yearly consumption rate of an American per year, we multiplied the allowable insect parts number by the estimated total consumption of the food product in the U.S. per year, then divided that by the U.S. population. Of course, some people eat these foods more than others, or not at all, so this is an approximation of how many insects or insect fragments an American person might eat over the course of a year.

According to the FDA Action Levels Handbook, infestation often occurs during the growing and harvesting stages of crop production. The source states it is economically impractical to yield a product that is completely free of these naturally occurring defects. Logically, the insects found in food products are likely to be common pests that infest these crops during growing, harvesting, and processing. We researched the most common pests per crop to find the insects that are likely to be included in each food commodity.

We won’t bug you if you’d like to share our content for noncommercial purposes only. Please be sure to link back to this page to give credit to the authors of this campaign.