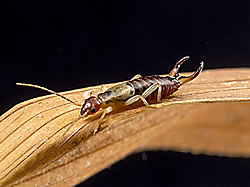 The European earwig (Forficula auricularia Linnaeus) is the most common earwig U.S. residents can spot inside their homes, despite not being a native species. These insects are nocturnal and spend their days hiding in layers of moist soil, decaying vegetation and other dark areas. This species is more likely to enter homes in large groups than most other species. They do most of their damage to vegetation outdoors, but their large numbers indoors can be unsettling to any homeowner. 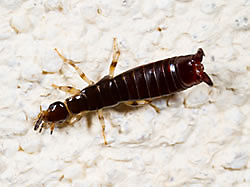 Although not native to North America, the Red-legged earwig (Euborellia annulipes) is most commonly seen in the southern portion of the U.S. It is especially dominant in Florida. This species does not have the distinctive set of leathery wings found on most other species of earwigs. However, they do have antennae and forceps along with a dark-colored back and yellow-brown underside. Like the European earwig, the Red-legged earwig is frequently spotted in large numbers inside homes and other structures. 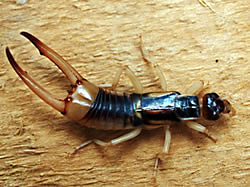 The Striped earwig (Labidura riparia) is typically a dweller of the southern United States and is not usually considered a threat to outdoor vegetation. This earwig is not found in abundance inside homes like some other species. However, inclement weather or dry conditions can send them scurrying indoors for the moisture they require to survive.