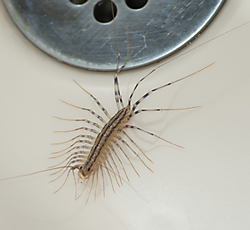 The house centipede (Scutigera coleoptrata) is probably the only centipede you’ll ever find in your house. These arthropods have thin legs and long antennae, which give them a fuzzy look. They are completely harmless. Unlike most centipedes, a house centipede can live its entire life indoors.

The adult centipede has 15 pairs of legs, which equates to one set for each body segment. The body of a house centipede is about 1 to 1 ½ inches long, but it looks much bigger because its legs are so long.

Key physical characteristics of the house centipede include:

Inside, the house centipede prefers a cool, damp location, which often includes basements, bathrooms, kitchens, inside cement block walls and crawlspaces. Outside, they seek out the same conditions, and are often found in leaf litter, under large rocks and in compost piles.

You are most likely to see house centipedes in the spring, when prey is plentiful.

Scientists say the house centipede is native to the Mediterranean region, but it has since spread through most of the world and is extremely common in North America.

The house centipede is an insectivore, often targeting pest insects inside a home. Its prey includes:

Other than being unsettling, house centipedes pose little threat to people or their pets. A house centipede will rarely bite a human, preferring to run away instead. Bites do not cause anything more than temporary, localized pain.

The house centipede can be controlled by running dehumidifiers, exhaust fans, limiting clutter and taking care to eliminate food sources.

Additional measures include the following treatments: