There’s no question we kill insects and arachnids to manage them, but what about wiping them out altogether? We surveyed over 1,000 Americans about their opinion on eradicating mosquitoes, ticks, and lice – from ethical and moral dilemmas to the potential impact on the environment. We even asked them to weigh in on the rising trend of genetically modifying species. Curious what we uncovered? Continue reading to find out.

Get Rid of Them? 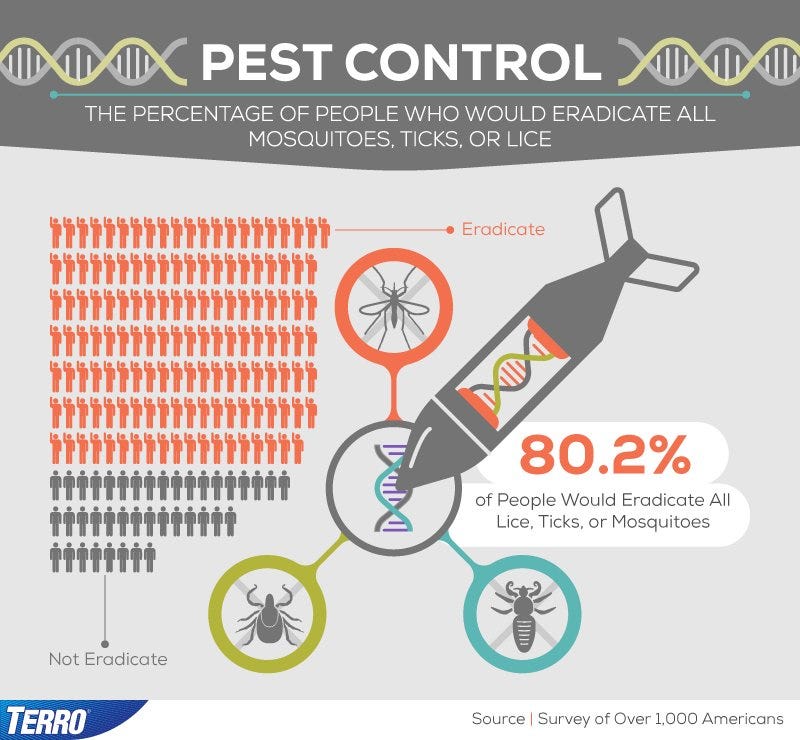 Of the people surveyed, more than 4 in 5 would completely eradicate lice, ticks, or mosquitoes.

With the rise and spread of Zika, mosquitoes can be dangerous. And anyone who’s tried to sit outside in the summer knows what a pest they can be. However, they’re still an integral part of the ecosystems they inhabit. Mosquitoes act as a food source for other creatures including birds (like purple martins), other insects (like dragonflies), and even some mammals (like bats). Without mosquitoes, natural ecosystems could be thrown into peril.

Mosquitoes aren’t the only pests with an argument on their side, though. Research has found lice may be able to help humans understand their history and evolution. While it may not make you feel any better if you (or someone you know) comes in contact with lice, it does raise a question about the morality of eradicating an entire species. 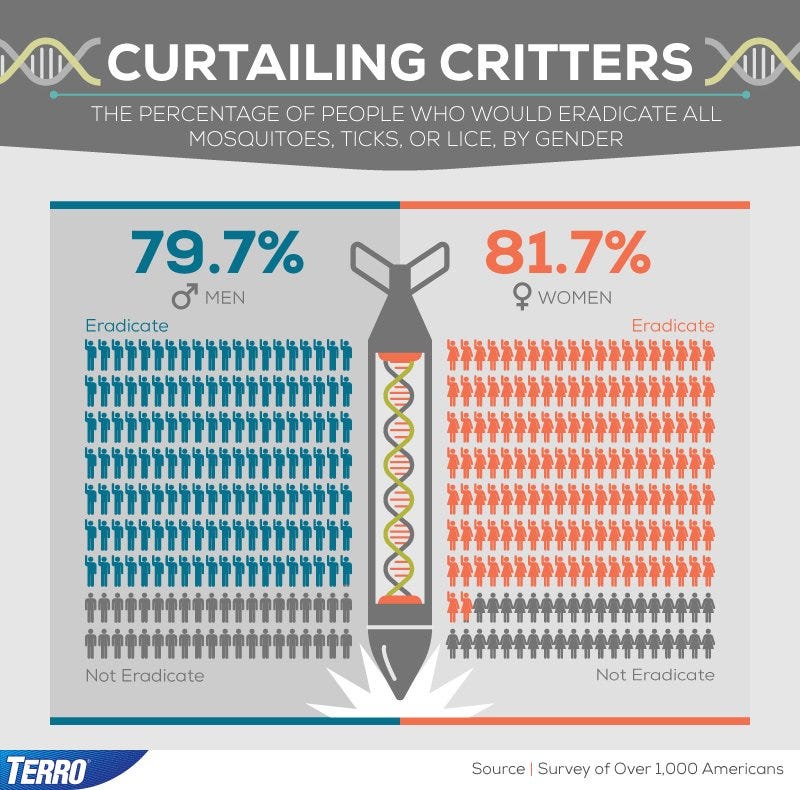 It turns out women were more inclined to nuke these pests (metaphorically, of course) than men. While nearly 82 percent of women would feel comfortable completely eradicating lice, ticks, or mosquitoes, less than 80 percent of men said the same.

When it comes to getting rid of unwelcome visitors, we certainly have a history of thinking up creative (and sometimes controversial) ways to keep them from becoming an epidemic in our homes, cities, and public spaces. Rats, like mosquitoes and ticks, can pose a grave risk to human health due to the infectious diseases they carry. In 2016, major U.S. metropolitan areas started using dry ice in an attempt to suffocate rats in their burrows without having to fish them out. Later that year, the U.S. Environmental Protection Agency (EPA) stepped in to stop the process.

Similarly, in early 2017, 20,000 genetically modified male mosquitoes were released in a particular area of the Florida Keys to control the spread of diseases carried by female mosquitoes including Zika, Dengue fever, and Chikungunya. While the release ultimately passed in 2016, many Florida locals protested in response to the environmental (and potentially undiscovered) repercussions of this method. 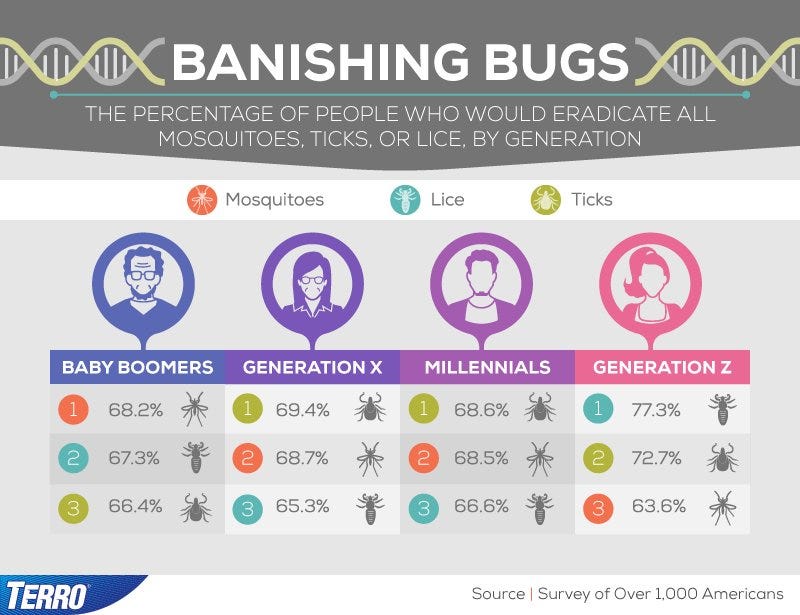 We found differing opinions on which pests were worthy of Armageddon based on the age of our survey respondents.

While baby boomers were the most concerned with removing mosquitoes, Gen Xers and Millennials had a different opinion. Both generations were more inclined to eradicate ticks than either lice or mosquitoes. While we may think of ticks as a danger to our pets, they can carry infectious diseases including Lyme disease, tularemia, and ehrlichiosis, which can be passed on to humans. However, Gen Zers were the most concerned with getting rid of lice. Due to their young age, they may also be the generation most likely to be affected by lice, which are typically found among school-age children. 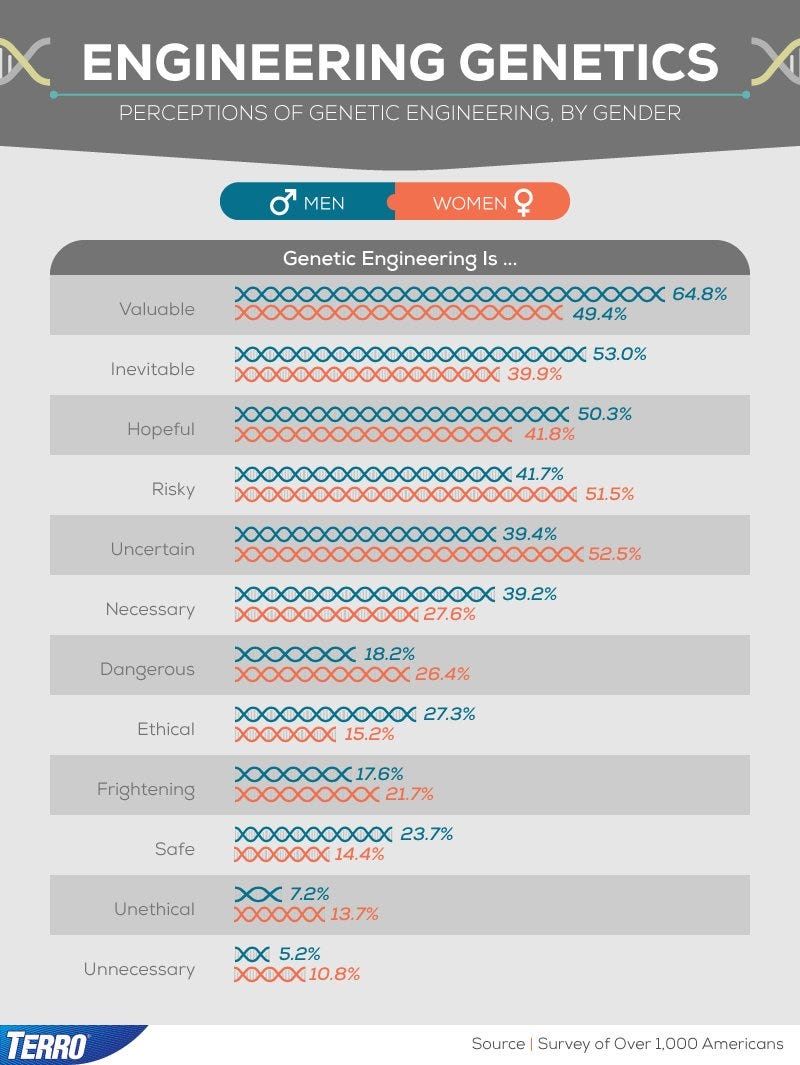 Genetic modifications to ward off pests are nothing new. Farmers have long been genetically modifying corn to make it less appealing to bugs and to reduce the need for pesticides. In some cases, these efforts have stopped working, and genetic modifications have now turned to pests themselves.

Genetic modification technology certainly exists – and in some instances has already been implemented, like with the mosquitoes in the Florida Keys – and essentially kills insects off by allowing the modified organisms to pass on genetic mutations or alterations through reproduction. It may be too early to determine future consequences, except to look at other organisms that may be positively or negatively impacted by the practice.

When asked about genetic modifications, nearly 65 percent of men believed the efforts were valuable, while more than half said they were hopeful and inevitable. More than half of women acknowledged feeling uncertain about the possibility, while over a quarter believed it was dangerous.

Only around 7 percent of men and almost 14 percent of women considered the genetic modification of pests to be unethical.

Who Sees It as Ethical

The generations also had differing opinions on the use of genetic modifications against pests like mosquitoes and ticks.

Ultimately, Gen Xers were the most likely to indicate some degree of hesitation about the idea. They were the least likely to identify genetic modifications as necessary, ethical, or hopeful. Baby boomers also expressed negative sentiment toward the concept, but nearly half (more than either Gen Xers or Millennials) said they believed it was inevitable.

Over a third of Gen Zers called the idea safe, and more than 1 in 5 Millennials and Gen Zers identified the process as ethical. 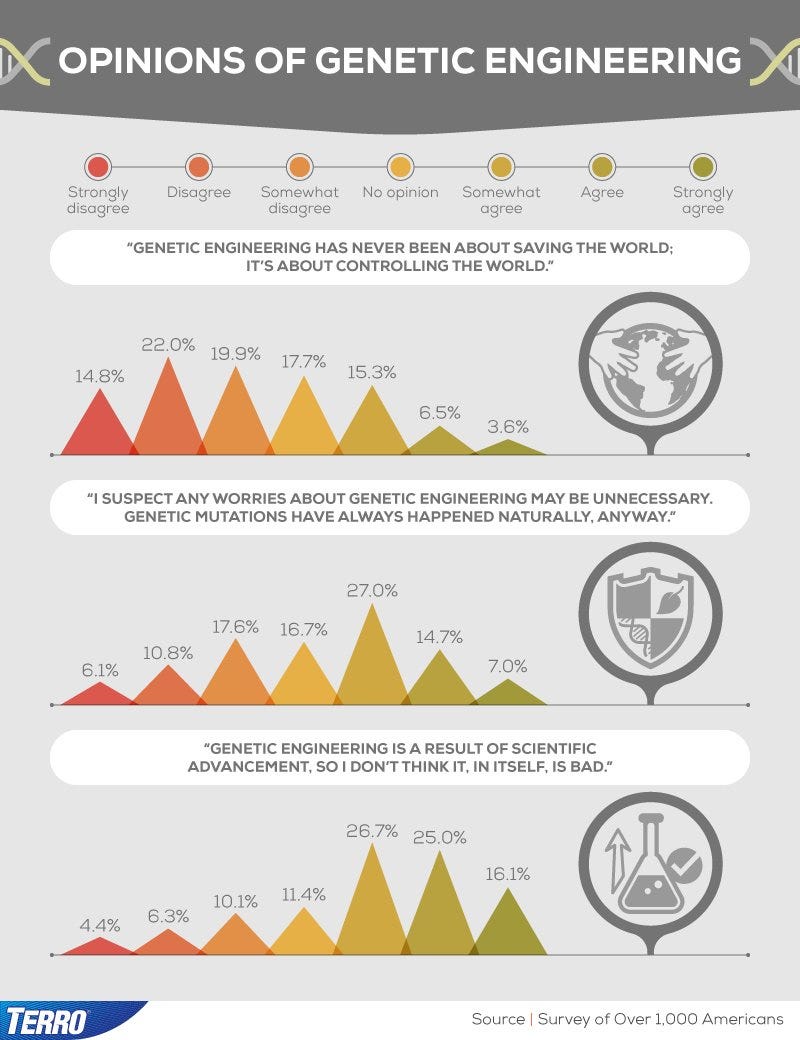 A majority of those surveyed disagreed with the notion that genetic modifications were more about controlling the world than saving it. More than 1 in 4 somewhat agreed genetic mutations occurred naturally, while nearly 22 percent agreed to a greater extent.

More than 26 percent of Americans somewhat agreed that genetic modifications were a result of scientific advancement and weren’t inherently bad. Roughly 1 in 10 somewhat disagreed with this statement.

Because we don’t yet know what the impact of eradicating pests like mosquitoes, ticks, or lice might be, we asked over 1,000 Americans to envision scenarios stemming from significantly altering the ecosystem.

On a scale of one to seven (with seven being extremely likely), people ranked the likelihood of eradicated ticks leading to an overpopulation of certain species a 3.9. They also ranked the odds of forever altering the ecosystem after eliminating lice (which can spread diseases to many war-torn countries) a 3.5. Finally, causing a decline in bird populations after eradicating a deadly disease caused by mosquitoes was ranked a 3.4, while saving 1 million lives but causing a new and potentially fatal disease was ranked a 3.2.

Saying No to Pests

A majority of the people were comfortable with wiping out bothersome pests like mosquitoes, ticks, and lice. Though there’s a potential for serious environmental side effects, most still wanted to do what it took to get rid of these creepy-crawlies. Still, when it came to genetic modifications, some people were more inclined to express a certain level of reservation at the idea.

Whether you’ve got ants, crawling insects, flying insects, or arachnids – at TERRO, we’ve got an eco-conscious solution to keep these unwelcome invaders from infecting your home. Regardless of what’s been bugging you lately, we offer a broad range of kid- and pet-friendly solutions from baits and traps to sprays for inside and outside areas that won’t hurt the environment. Visit us online at TERRO.com to learn more.

We surveyed over 1,000 Americans regarding whether they would be willing to eradicate all mosquitoes, ticks, or lice. We provided them with possible benefits and consequences and asked if it would still be worth it. Also, we gauged their feelings toward genetic engineering technology.

Think our story is something to buzz about? We’d love to see the results of our findings featured on your site for any noncommercial use; we only ask that you ensure a link back to this page, so our contributors earn credit for their work.