A Smelly Nuisance: The Stink Bug

Pennsylvania became home sweet home to the brown marmorated stink bug in the 1990’s, and over the years the pests have evolved into a common nuisance in homes and farms throughout the United States. Annoying to homeowners and utterly destructive to fruit and vegetable farmers, stink bug populations are only on the rise.

Since it can be difficult to first identify these reeking pests by scent alone, let’s start by looking for some distinguishing characteristics to effectively annihilate your infestation.

All species of stink bugs smell putrid, but let’s not forget about some of our other senses. More importantly than odor, stink bugs are identified by their shield-shaped bodies, which are about as wide as they are long. Walking and flying are both effective means of transportation for these guys, so look for six legs and distinguishable wings. Most species share these common characteristics, but there can be small variances (mostly in color), depending on which species you are battling.

The most common stink bug you will encounter is the brown marmorated. Other species include the brown, green and dusky stink bugs. Adults can vary in appearance from the nymphs, which are the immature bugs. 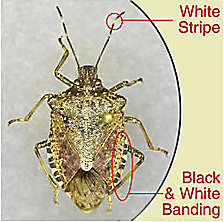 Adults can be up to an inch in length, so it is hard to miss these stinky visitors. The bodies are speckled brown and gray, with dark bands on the outer edge of the abdomen. Look for white bands on the antennae. The head has small round patches that are metallic blue or copper.

These tiny stinkers will have deep red eyes and the abdomen can range in color from yellowish-red to white with red spots, depending on how old they are. The head, thorax and legs are black. 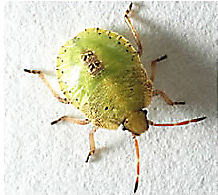 Look out for a yellow or gray color with dark spots on the back, and if you can stand to flip them over, you’ll notice that the belly is pink. The ends of the antennae are darker than the rest of the body.

Smaller in size than the adults, nymphs are oval in shape and are generally pale green in color.

True to their name, the green stink bug is a light, solid green color with an orange or yellow border around the head and body. The antennae are generally green with black bands.

These youngsters have an oval-shaped body and are black, with a white pattern on the abdomen. As they grow into adults, they can range in color from green, yellow or red, and often these colors can show up on the body at one time. 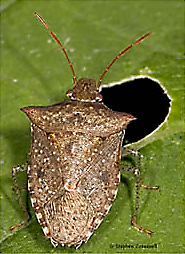 When and Where Will I Find Them?

Who said that insects can’t hibernate? As the temperatures start to turn down, stink bugs are turning up. You can find these guys desperately trying to get into your home around windows, doors and any sort of crevice that has direct access to the warmth of your home. Once inside, they will make their way behind walls and into crawlspaces, to spend the winter until the warm spring sunshine draws them back out again. In the springtime, you will discover them trying to escape from your house the same way they got in just a few months ago.

Once the stink bugs make their trek outside to the warmth, they begin to wreak havoc on gardens and plants. They can be a particular nuisance in apple and peach orchards, corn fields, berry patches and soybean fields. To diagnose a stink bug problem, look for a mark on the leaf that resembles a cat face. The feeding bugs make this unique scar from the toxins in their saliva.

When Do They Stink?

A seemingly obvious question, it is important to know when these guys are going to unleash their smelly wrath. The gland that produces the chemical is located on the abdomen, and they will release their scent when an obvious threat is present. Some can even shoot their scent several inches!

If a vacuum cleaner is your mode of attack against these invaders, use caution and prepare for your vacuum cleaner to be on the stinky side for some time afterwards.

How to Get Rid Of Them?

If you are dealing with stink bugs overrunning your home, use TERRO® stink bug killer to annihilate them on contact. This aerosol spray can be used either indoors or outdoors, so it works on the bugs already in your home and those on the outside urgently trying to get in. Use this in cracks and crevices, around doors, windows and your home’s foundation. If spraying indoors, it doesn’t leave a harsh odor.

After dealing with a nasty stink bug infestation, you probably don’t want to enter round two. Once the infestation gets inside your walls, it can be almost impossible to control, and professional measures may need to be taken. By using preventative measures in the beginning, you can ensure that your stink bug invasion stays small and easy to control. Try using some of these tips: 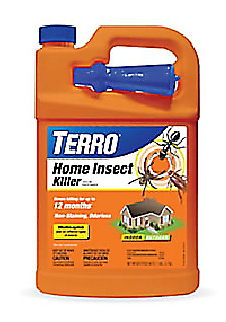 Since stink bugs can get into your house through cracks, crevices, pipes and chimneys, it is essential to seal those places up, especially when fall rolls around. Use a silicone or silicone-latex caulking to fill in cracks and repair broken window and door screens. Check weather stripping for cracks and repair as needed. If you really feel like going the extra mile, make the journey into the crawlspace or attic to check for cracks and broken screens around vents.

These can be used as an effective way to keep stink bugs and a variety of other home-invading insects out of your humble abode. TERRO® home insect killer should be used around the perimeter of the home, mainly around windows and doors, to ward off unwanted guests.

Gardening Know-How - How to Kill Wasps

Do Your Own Pest Control - Wasps

How Stuff Works - How Wasps Work