How to ID Spiders by Their Webs

When Halloween rolls around, we’re eager to decorate our homes with spider webs. But the rest of the year? Webs – whether they’re fake or real -- aren’t so welcome.

Everyone knows spiders can help keep pests under control, but to some people, spiders and their webs are the pests. To them, allowing webs to linger is the sign of a messy house. Most will clear spider webs and cobwebs out of unused areas and sweep them from corners.

Aside from the cleanliness issue, spiders can be dangerous. North America’s “Big Three” spiders – black widow, brown recluse and hobo spiders – have venomous bites that can be harmful to people and pets. Other spider bites can result in rashes and other skin irritation.

With those dangerous spiders in mind, it’s important to take a moment before brushing a web away to inspect it. Certain web types, for example, can indicate the possible presence of a dangerous spider. With such information, you will also know to set out spider traps or to treat an area with spider killing spray, both of which can help you get rid of spiders – whether they are dangerous or not. 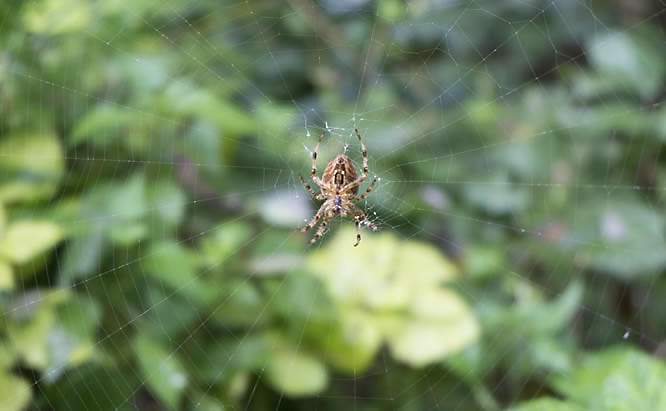 Some spiders look a lot like other, more dangerous spiders. This orb weaver spider, for example, has a fiddle-shaped marking that some people may mistake for a hobo spider. However, hobo spiders don't spin these types of webs!

The first thing to consider about a spider web is where it’s located. Spider species use their webs to hunt in different ways, so location is key to capturing a meal. In fact, some spiders don’t even use webs to hunt – their webs are used to create shelter or to protect delicate eggs.

When observing a spider web, take note of where the web is placed, because that can help you with its ID later on: 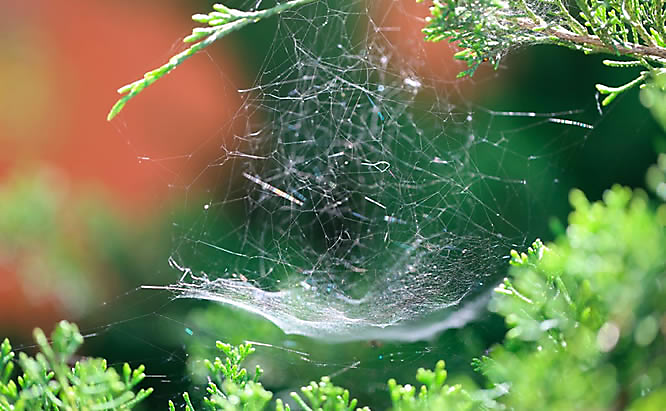 Along with placement, there is another characteristic that can help you identify a spider by its web – the web’s overall shape. In general, there are five main types of bait-style webs: 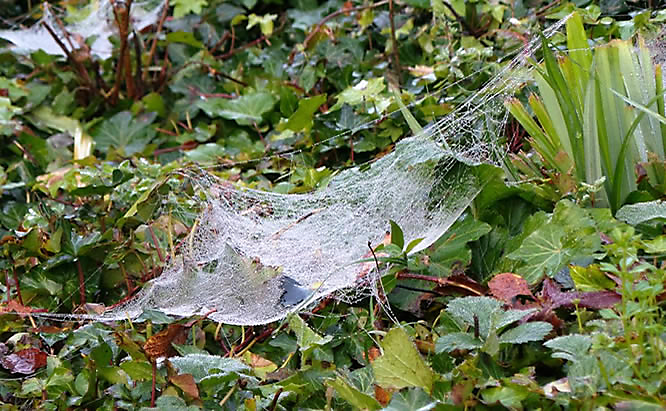 ID SPIDERS BY THEIR WEBS

With these characteristics in mind, use a spider identification guide to help you determine the species. You could also consult a local exterminator or an arachnologist for further assistance.

Bear in mind though that spiders, as well as insects, can be very hard to identify in the wild. You may only be able to determine its general family or genus rather than identifying the exact species.

Of course, there are some spiders that have distinct web styles. For others, including the “Big Three,” it’s important to know what to look out for. With that in mind, we put together a few snapshots of some important and/or interesting spider webs worth knowing about. 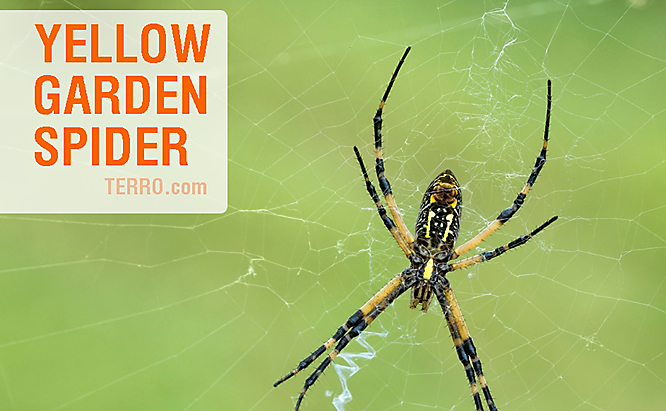 A large black-and-yellow arachnid, the yellow garden spider (Agriope aurantia, shown above) spins a web in open areas and creates the familiar spider web pattern, but adds its own twist to the classic design. A large black and yellow spider, you’ll recognize its web by a unique zig-zag pattern found inside it. The purpose of this added touch is disputed – some say it warns birds to avoid flying into the web, while others say it hides the spider from insects. These spiders are not aggressive and rarely bite. 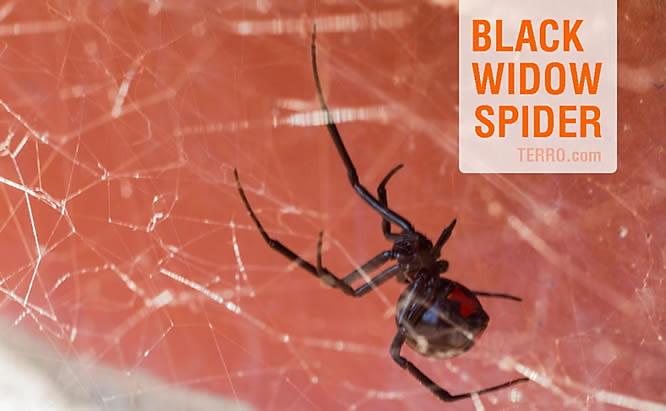 The black widow spider (Latrodectus mactans, shown above) weaves a tangled web to catch its prey, and once ensnared, the spider wraps it and bites it to inject its venom. After the venom takes effect, the spider carries its meal to a concealed area for consumption, so you may not see the black widow immediately. The black widow’s silk is said to be exceptionally strong, a characteristic you may note when trying to brush it away with a broom. Black widow bites from mature females pose a serious threat to people, though deaths from their bites are exceptionally rare. 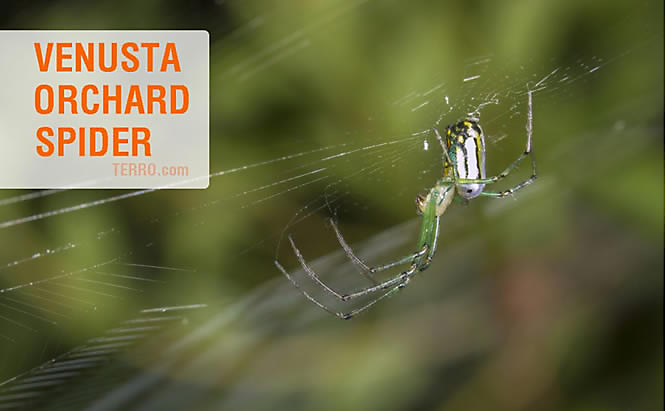 Spinning a horizontal web, the venusta orchard spider (Leucauge venusta, shown above) is a long-legged arachnid with vibrant colors. It has green legs and a back that’s dappled with whites, yellows, and blacks. Their webs hang in shrubs and trees and feature a widely-spaced spiral band. The spider will bite its prey and wrap it in silk. 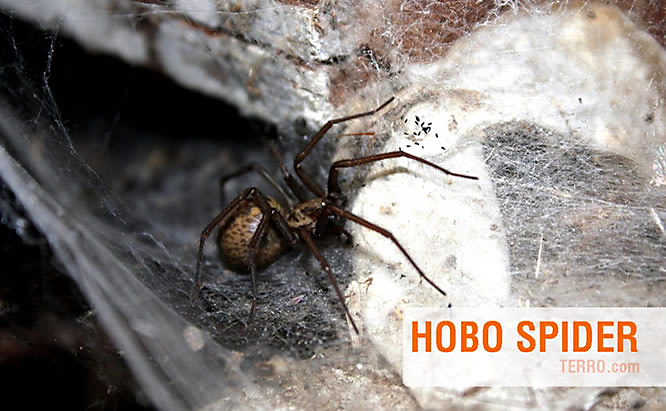 Mostly found in the western U.S. and Canada, the web of the hobo spider (Eratigena agrestis, shown above) is a funnel type and rarely found in human habitations. Instead, they prefer to set up their webs in fields. Generally not considered aggressive, it may become so if its eggs appear to be threatened. Scientists dispute just how toxic their venom is, so, just to be safe, steer clear of these spiders and their webs. 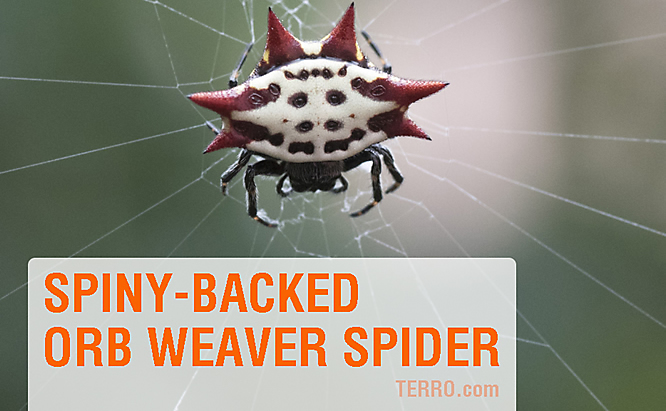 Spiny-backed orb-weaver spiders (Gasteracantha cancriformis, shown above) can be found throughout the U.S., and they create spiral orb-style webs. Their most striking features are the crab-like spines protruding from its sides and their unique coloration patterns. Their bites are generally harmless to people. 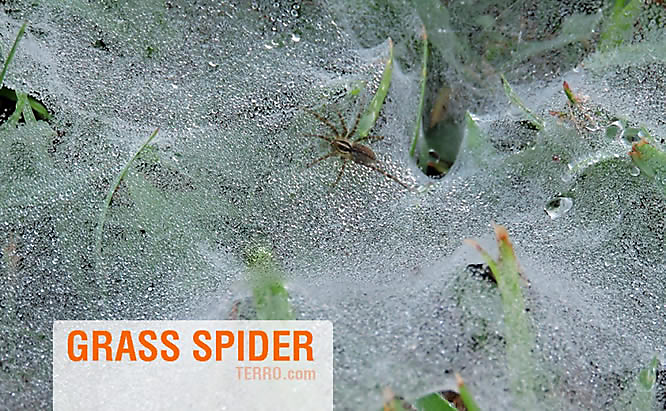 There are many kinds of grass spiders (Agelenopsis spp, shown above) and they weave a funnel web in bushes and grass. This web isn’t sticky, but that doesn’t matter to these fast-moving arachnids. As soon as they sense a vibration on their web, they scramble out of their funnel to make a kill. Their venom paralyzes insects and other arthropods but isn’t known to harm humans.

FIGHTING SPIDERS ON YOUR OWN

If you have a spider problem in and around your home, know that TERRO® has many DIY solutions for getting rid of spiders. We mentioned two options above – Spider & Insect Traps and Spider Killer Spray – but there are many more effective spider treatments available from TERRO®.

Once you have your spider problem under control, leave us a comment below to tell us about the experience or visit TERRO® on Facebook and post your pictures there. For exclusive updates on pest control products, as well as helpful information and advice, subscribe to the eNewsletter from TERRO®.

Have a pest problem? Check out some of our solutions below!