Do you have cockroaches in your home or business? If you do, then you are looking for a way to get rid of them and ways to keep cockroaches from coming back. With a variety of cockroach control methods, TERRO® can help you battle these frustrating insects.

Cockroaches are an ancient group of insects that date back some 320 million years, and have likely been pests to humans since the first permanent human settlements were developed.

Understandably, humans haven’t taken too kindly to these disease-spreading pests, and cockroaches have proven especially difficult to eradicate due to their small size.

As a result of their reproductive success and general lack of predators, cockroaches can now be found around the world and in nearly every type of human habitation, including homes, hotels, businesses, restaurants, apartments, food-processing facilities and other structures.

As with any animal species, cockroaches are attracted to the availability of food, water and shelter.

As omnivores and scavengers, cockroaches are not too particular about what they eat, although they seem to show a preference for meats, sugars, fatty foods and starches. Older roaches can have more variation in their diets and have been found nibbling on fingernail and toenail clippings.

Some cockroaches also resort to cannibalism when other food sources aren’t available – eagerly eating the wings and legs off their fellow cockroaches.

Moisture and water are other huge attractants for cockroaches, and they can often be found around leaky water pipes.

Cockroaches are known to trigger the development of asthma in children and adults. The asthmatic reaction is triggered when bits of cockroach excrement and decomposing cockroach body parts reach the bronchial tubes. This problem often persists as long as the person is continuously exposed to a cockroach-infested area.

Aside from the asthma issue, cockroaches are “renowned” for their ability to transmit a number of pathogens dangerous to humans, including E. coli, Salmonella, dysentery and typhus. Food poisoning via E. coli and Salmonella often share several common symptoms including belly pain, diarrhea, nausea, vomiting and stomach cramps.

If you exhibit these symptoms on a regular basis, it may indicate a roach infestation in your home, workplace or another place you regularly visit.

Further identifiers include six legs, two long and active antennae and an oval shape. Some cockroaches have fully-developed wings, though only a few species will actually fly.

A cockroach life cycle consists of three stages of development – from egg to nymph to adult. Life begins for a new cockroach when the female cockroach produces an egg capsule called an ootheca. This egg case, which is shaped like a loaf of bread, holds two rows of eggs which mature inside the ootheca.

Freshly hatched cockroaches are called nymphs, and they develop into adults over time – molting as they grow bigger and eventually reaching sexual maturity.

Can Cockroaches Get In My Food? 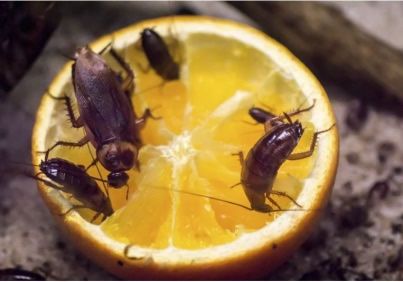 Unfortunately, cockroaches are a widespread pest and they are frequently a problem in household kitchens, restaurants and food-processing facilities. Modern food safety regulations, the restaurant industry and food manufacturers all take their own steps to keep roaches from mingling with the food supply, and for the most part they do an excellent job. However, some disturbing facts are worth noting, simply to encourage further efforts at eliminating these pests from areas they shouldn’t be.