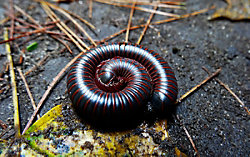 A millipede is a docile arthropod found worldwide. It spends its time eating decomposing plant material, making it vital to the ecosystem.

These creatures share a similar look and name to centipedes, but they are vastly different. A centipede is a carnivore, where millipedes prefer to eat decomposing plant material.

The word millipede literally means “one thousand foot,” but despite that name, no known millipede has that many legs. Instead, these arthropods usually have less than 100 legs. Even the millipede species known to have the most legs comes up shy of the 1,000-leg mark – it only has about 750.

As mentioned above, millipedes are arthropods, but they are not insects. Instead, millipedes and centipedes have their own “branch” of the arthropod family tree and are known as myriapods.

While millipedes are considered “docile,” you should not pick them up. Many of these creatures have a defensive secretion that can cause chemical burns on human skin. While this reaction is generally mild, it’s often powerful enough to cause temporary skin discoloration, itching and blisters. Some millipedes’ secretions are much more powerful though, and as a result, all millipedes should be considered potentially dangerous. 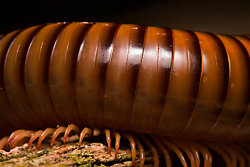 Millipedes have simple needs, and often your yard, home or business can fulfill those needs. Food items are a prime attractant – namely decomposing plant matter. They are also drawn to areas that have high humidity or moisture. Lastly, opportunities for shelter are important – and they usually find shelter inside, under or among their food source.

So, with that information, there are a few areas where humans and millipedes often cross paths:

Are Millipedes Harmful to People or Pets?

Generally, millipedes are considered low-risk arthropods as they are not aggressive. Still, when a millipede is agitated, it can secrete a compound that may irritate the skin or eyes. The good news is that the secretions from millipedes found in the U.S. and Canada are considered mild compared to those in tropical areas.

There are several signs that you may have been exposed to a millipede’s defensive secretions. If you have encountered or handled a millipede, you may notice: 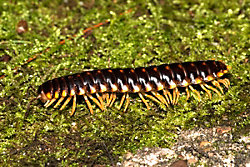 What Do Millipedes Look Like? How Do You Tell a Millipede from a Centipede?

Millipedes are long, insect-like creatures with multiple body segments. Most of their body segments contain two pairs of legs. Their body is usually cylindrical in shape and they will often roll up into a spiral to protect themselves.

Coloration of millipedes varies greatly, but most are deep orange, brown or black. They also have small antennae.

Millipedes are slow-moving, and their legs push them forward in a wave-like motion.

Many believe that millipedes and centipedes look very similar, but differences in their appearance and behavior help tell the two apart. Centipedes are active and very quick, often darting from one spot to the next bit of cover, while millipedes are much slower. Centipedes generally have less than 15 pairs of legs and only one pair per body segment, while millipedes can have as many as 350 pairs of legs. Centipedes mostly feed on other creatures, specifically insects and spiders, using a poison to paralyze their prey. Millipedes feed on decaying plant matter. Most importantly, millipedes do not bite people, but centipedes can and will bite.

A few weeks after courtship, the female millipede lays up to 100 eggs, usually in a nesting burrow.

There’s no clear consensus of millipede lifespans in the wild, but those kept in captivity can live up to 10 years. That lifespan, along with ease of care means that millipedes are considered a good pet for “insect” lovers. Unlike wild millipedes, pet millipedes are accustomed to being handled and rarely release their defensive secretions.