Are stink bugs invading your home? TERRO® Stink Bug Killer can help get rid of stink bugs and keep them away. Read below for some useful stink bug information. 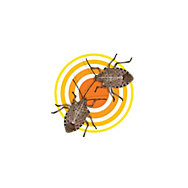 The stink bug, also known as a shield bug, is easily recognized by its five-sided or shield-shaped body. Adult stink bugs are about 3/4" in length with broad bodies, sucking mouth-parts and a set of foul-smelling defensive glands underneath their bodies.

An agricultural pest native to China and Japan, stink bug invasions have been on a steady rise in the U.S. since they arrived in the late 1990's. A nuisance to fruit, vegetable and farm crops, stink bugs have officially invaded 41 states, from as far west as California to as far north as Maine.

In spring, the adult stink bug lays 20 to 30 eggs on the underside of leaves. The eggs are elliptical in shape and range from light yellow to yellow-red in color. The eggs hatch into small red and black nymphs that go through five molts, or immature stages, growing from less than 1/16" to about 1/2" through summer.

Adult stink bugs can be seen on plants, sidewalks and building structures in warm temperatures. By fall they begin searching for warm overwintering sites, entering your home through cracks, open doors and windows, even hitching a ride on you or your pets.

Stink bugs feed on a wide variety of plants. Around the home, stink bugs can be found on ornamental plants and in the garden. Commercially, stink bugs have caused severe loss in apple and peach orchards, as well as blackberry, sweet corn, field corn, and soybeans. Stink bugs are a nuisance pest that can cause great damage to fruit, vegetable, and farm crops.

When Will Stink Bugs Come Inside Your Home?

Your home can become a stink bug habitat when they are seeking shelter as the weather starts to turn colder in the fall. They can easily make their way inside your home through small cracks and crevices. You’re likely to see them on windows and walls that receive direct sunlight, as stink bugs crave the warmth. Stink bugs will spend the cold winter months hiding behind walls, in crawlspaces and other out-of-the-way places in your home. They’ll reappear in spring, and you’ll again see them on your walls and windows. But this time, instead of looking for a warm spot to hang out, they’re actually trying to find a way to get outside!

Signs of a Stink Bug Infestation

It’s not difficult to tell if your home or garden has become a stink bug habitat. Their relatively large size (about 12 to 17 mm long) and their distinctive shield shape make them easy to see. And with the exception of the winter months, they don’t make much of an effort to hide. One way to tell if you have a stink bug invasion in your fruit garden is to look for a scar on the fruit that resembles the face of a cat. The scar is caused by the toxins that are present in the saliva of the feeding stink bugs.

How to Prevent Your Home from Becoming a Stink Bug Habitat

When it comes to preventing stink bugs, habitat control is an important step. Seal cracks around doors and windows with caulk and apply weather stripping under exterior doors. Cover crawlspaces and attic vents with screens, and repair or replace any damaged window or door screens. Keeping your grass cut low and eliminating weeds can make your lawn and garden much less inviting to stink bugs.

How to Get Rid of Stink Bugs