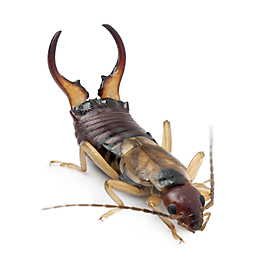 The name earwig (or “ear wiggler”) comes from the age-old superstition that these insects are prone to crawling into the ears of sleeping people. This is – thankfully – false. This unsettling myth probably developed from the fear many people have of earwigs’ pincers. These insects are nocturnal and typically live outdoors in gardens, compost piles and other moist areas, but often find their way inside homes to seek out other damp locations.

Aside from their prominent pincers, which are curved on males and straight on females, adult earwigs are characterized by two pairs of leathery wings, antennae, six legs and dark brown, reddish, black or tan bodies. Earwigs move relatively quickly, and you can often find them scurrying when you disturb the areas where they hide.

Some species of earwigs emit a foul, yellow-brown liquid as a means of defense. Though the liquid smells terrible, it is not harmful. They also produce another scent, one that is undetectable to humans, but attracts other earwigs. 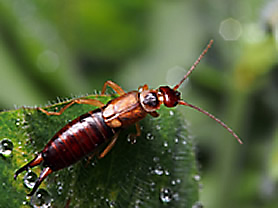 Earwigs have very few needs – most of which can be satisfied in your garden or elsewhere in your yard. In fact, many species of earwigs are rarely found indoors. As with most insects, food sources are their primary attractant. For earwigs, that usually means decomposing plant matter. Outside, they will seek out moist soil, compost piles and damp, decaying vegetation.

However, they can also be a nuisance inside of homes. They usually get inside for one of two reasons: to escape from inclement weather conditions and accidental transport inside via humans. Once inside your home, they will seek out spaces that offer a dark, damp environment similar to the moist soil they enjoy outdoors. These areas include basements, kitchens, laundry rooms, potted plants and more.

What Do Earwigs Eat?

Despite what their large forceps might suggest, earwigs do not prey on large insects. They are omnivorous, and an earwig’s typical diet is made up of decomposing vegetation. You’ll often find them feeding (and living) in compost piles, layers of wet leaves, mulch and areas with algae, mold and fungi. If they make it inside your home, don’t be surprised to find earwigs feeding on your trash.

Some of the predatory species of earwigs also feed on smaller insects and arthropods such as aphids. Snails can also be on the menu for these insects. Earwigs aren’t fussy eaters, so they don’t care whether their food is alive or dead. Their forceps allow them to consume tough foods, giving them plenty of dietary options.

Are Earwigs Harmful to People or Pets?

Many people are afraid of earwigs, assuming they bite. After all, they have those intimidating pincers, right? In fact, there is a long-held belief that earwigs burrow into the ears of people as they sleep to enjoy the dark, moist cavity. Even medical professionals in the middle ages believed this – that’s how the insects got their name. However, this is just what it sounds like, folklore and myth. Ultimately, earwigs pose a greater danger to your gardens and plants than they do to people or four-legged family members.

The prominent pincers, also known as forceps, which are frightening to many people, are actually used for defense and to aid in feeding. If you happen to pick up an earwig, they will likely use their forceps as protection. However, this is not a bite or a sting. They have no venom and these defensive pinches, while sometimes painful, rarely break skin. Although, not harmful to people or pets, some species are known to emit an offensive odor if threatened or squashed – so you may want to avoid stepping on them. 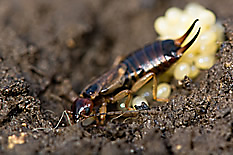 Earwigs have a simplified metamorphosis in which they transfer from eggs to nymphs and then adults in about 70 days. After autumn mating, female earwigs lay up to 80 small, whitish eggs in the top layer of soil where they spend the winter.

Eggs typically hatch in a week. The mother will take care of and protect the nymphs for about two weeks, until after their second molt. The nymphs resemble the adults, though much smaller and almost white in color. They shed their shell a few times until they reach adulthood, appearing a paler color until the new shell hardens and matures.

Female earwigs have long lives for insects – they can live longer than a year. Males, however, typically die off in the winter or early spring after they have satisfied their procreation duties.