Have you spotted a centipede speeding along your kitchen floor or crawling inside the tub? TERRO® has multiple solutions to help you get rid of the centipedes inside your home. 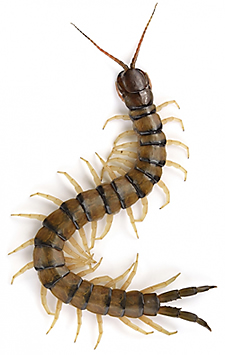 A scientist will tell you that centipedes aren’t insects; instead, they will explain that centipedes are actually myriapods, making them distant cousins to insects. Their most notable feature is their elongated body and dozens of legs, an obvious feature that separates them from insects. As insectivores, centipedes hunt other bugs and paralyze them with a venomous sting.

The word centipede means “hundred feet,” but there are no centipede species that have exactly 100 legs. Depending on the species, they may have as few as 30 and as many as 354 when mature.

About 3,100 centipede species have been identified by scientists, and these bugs are found across the globe – some species even live above the Arctic Circle.

Centipedes are drawn to an environment that offers them three key things:

What Do Centipedes Eat?

Centipedes are insectivores, meaning they eat small insects, spiders, mites and other arthropods. They are generally nocturnal hunters.

For centipedes, speed is their best hunting tool. Upon sensing prey, they will move quickly to attack. Once they’ve captured their meal, most will use a poison to incapacitate their prey before consuming it.

Are Centipedes Dangerous to People or Pets?

Still, it’s important to remember that most centipedes use a poison on their prey. Centipedes deliver this poison through a pair of forcipules that are situated near their heads. These hollowed-out, pincer-like limbs can be used in times of desperation, too, and they may be used to deliver a sting if they are picked up or stepped on. Most centipedes, however, don’t have the strength to pierce human skin.

One exception to that is the Florida blue centipede. This outdoor centipede is said to react aggressively against anyone who bothers it. People who have encountered this centipede, which can grow to about 3 inches long, say it delivers a sting that rivals a bee sting. It’s mainly found in the southeastern U.S.

What Do Centipedes Look Like? How Do You Tell a Centipede from a Millipede?

Another key difference is that centipedes have forcipules, a set of poison-injecting pincers. Since millipedes don’t eat living creatures, they don’t need these pincers.

After courtship, the female centipede lays between 10 and 60 eggs. The eggs develop for a few months before hatching. Young centipedes have fewer leg pairs than adults, and, with each molting, they add body segments and more leg pairs until fully grown.