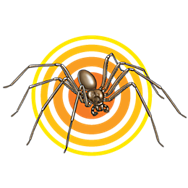 Here are some interesting facts about spiders. As the largest order of arachnids, there are between 40,000 to 50,000 known spider species throughout the world. While spiders vary in size and color, they are air-breathing arthropods that share many common characteristics: an exoskeleton, which they molt or shed as they grow; eight jointed legs in four pairs; and segmented bodies covered in hair so fine it's not always visible.

Most spiders can build webs from silk-spinning structures called spinnerets located at the rear of their bodies. Spider silk is extremely strong and sticky. They do not have jaws to eat solid food, but instead have chelicerae or fangs that inject venom into their prey, which liquefies their meals.

Spiders do not have antennae, but they do have four pairs of eyes. Spiders also have an advanced central nervous system, enabling them to sense danger. No wonder you can’t sneak up on them!

In the spider world, the female spider dominates. Female spiders are usually larger than males and may be stronger and more poisonous. Some species of female spiders will kill and eat the male after mating.

The spider life cycle has three stages of development: egg, spiderling and adult. Depending on the species, spiders can lay up to 3,000 eggs, usually in one or more silk sacs. In some spider species, the female dies after laying the eggs. Others carry the egg sac in the chelicerae or attach it to their spinnerets. Still other spiders hide their eggs in nests or attach them to the web.

Spiders go through their larval stages within the egg. Spiders produce so many eggs because not all will reach maturity. When the eggs hatch, the spiderlings that emerge are miniature versions of their adult selves.

Depending on the species, the average life span of a spider can be up to a year or two. Most spiders will only survive for one season.

With up to 50,000 species of spiders, spider habitats vary widely. Spiders are able to live anywhere in the world except Antarctica. They do not live in bodies of water or in the air, but can adapt to almost any type of environment: hot or cool, wet or dry, in the garden or in your house.

It doesn't matter how clean the home, spiders can be found in basements, crawl spaces, closets, around baseboards and entryways, under sinks and cabinets, or anywhere there may be clutter.

Outside, spiders are beneficial, in that they prey on other insects, often eliminating other pests from the garden. While they do the same inside, people prefer to control spiders and insects with pesticides.

If you're worried about "The Big Three" venomous spiders that live in the U.S., check out our U.S. Venomous Spiders: Myths & Facts infographic to determine if you might have stumbled across one of these potentially dangerous arachnids.