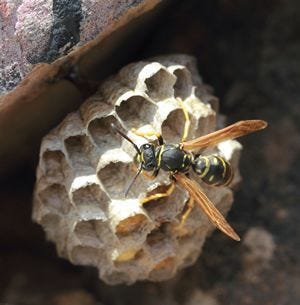 For every colony of northern paper wasps, one queen calls the shots. As a species characterized by its colonies and reproductive dominance, northern paper wasps take their lead from the behavioral patterns of their female leader. And the queen means business: she uses threatening postures to establish hierarchy over her subordinates.

The paper wasp nest might be the first sign that you’ve got unwanted company. Look for an open-celled paper nest above doorways, in rafters or under the eaves of roofs. In the summer, nests can grow quickly to a width of 6 to 8 inches.

The physical appearance of the northern paper wasp varies by habitat. In fact, in the United States alone, three different species of paper wasps, each with its own striped pattern, can be found in three separate geographical regions. However, all paper wasps share a few traits: 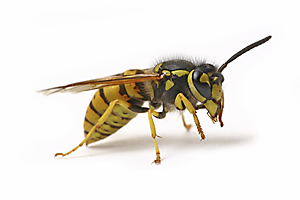 Watch for a variety of patterns on the abdomen and thorax and some have yellow splotches, long stripes, small dots or a combination of patterns.

Wood is a major feature of the northern paper wasp habitat. The species commonly inhabits woodlands, savannas and built wooden environments – all places where resources for nest building are available. Interestingly, this species uses its oral fluid to create a pulp-like paste, used as “concrete” for binding wood together. 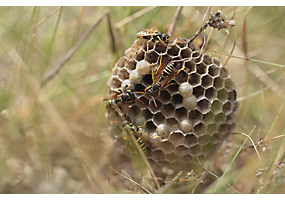 Similar to other wasp species, great northern wasps lay fertilized eggs in individual nest cells. Queen bees and subordinate females protect the larvae and cover them with a silk protective lining. The first generation of larvae develops into infertile females, which are the workers of the colony. Next to mature are the males and fertile females, which are the next generation of queens. And then the lifestyle starts over: queens lie the next generations of queens and die. Average life span is about one year.

Subsisting primarily on plant nectar, adult northern paper wasps are considered omnivores and insectivores, foraging for caterpillars and small insects to provide food for developing larvae. Once a wasp captures prey, it malaxates the food, orally softening it enough to absorb its liquid and then regurgitating the solid remains to feed to its young.

No one wants a swarming wasp nest hovering above their doorway. While this species may offer ecological benefits to your garden, northern paper wasp populations can be particularly threatening to those with an allergy to wasp venom and are best eliminated.

Here are a few tips for how to control northern paper wasps: 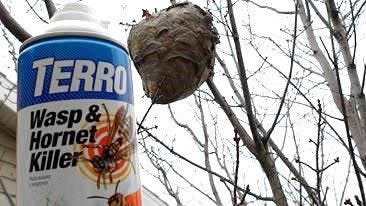