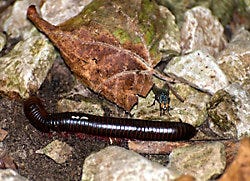 The North American Millipede (Narceus americanus) is common east of the Mississippi as well as nine other states – Arkansas, Iowa, Kansas, Louisiana, Minnesota, Missouri, Nebraska, Oklahoma and Texas. It sports a gray exoskeleton with red banding.

These arthropods can be found in forest, agricultural, suburban and urban areas. With a permeable exoskeleton, they are prone to drying out and usually seek out high-humidity habitats. 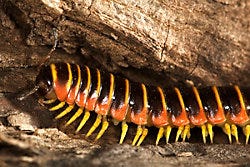 The Apheloria virginiensis is a millipede that has no widely accepted common name, yet is fairly common in the northeastern and mid-Atlantic U.S., and Ontario in Canada.

This millipede, recognized by its distinct semi-flattened shape and a “Halloween” coloration, shouldn’t be touched. It is known to release a cyanide compound when threatened, so avoid contact when possible.