What are Bed Bugs?

Bed bugs are small, parasitic insects that feed entirely on the blood of their host animal. The common bed bug, cimex lectularius, prefers human blood. They use specialized mouth tools to saw through the skin of their sleeping host and inject their painkilling saliva which allows them to drink the host’s blood.

During daylight hours and when not feeding, bed bugs hide in bedding, mattresses and other areas that provide quick access to food.

These creatures were once believed to be eradicated from the U.S., but began to reappear in ever-growing numbers since the 1980s. Experts say their resurgence is to be blamed on increased international travel, pesticide bans, increased immunities to pesticide among the bed bug population and complacency in prevention efforts.

Two types of attraction must be discussed when dealing with bed bugs. First, what draws a bed bug to a home? Second, what attracts them to their victims?

Most people worried about bed bugs are concerned about how they got into the home. It’s important to understand that nothing you have or haven’t done triggers a bed bug infestation. Instead, bed bugs almost always arrive at a home by happenstance. They can be picked up in the office, a school, in a restaurant, at a movie theater, on vacation or anywhere people are.

If you do have bed bugs in the home, they will be drawn to you (and anything else that’s living) because of your body heat and the carbon dioxide that you expel. By moving into your bedding or furniture, they simply get easy access to you while you remain relatively still. 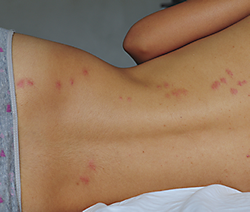 There is a bit of good news about bed bugs. Despite the fact that they’re stealing your blood, they don’t transmit disease to you or between you and other victims. Unfortunately, some people can get an asthmatic reaction to bed bug skin sheddings.

Also, many people find the inflammations created by bed bugs itchy. Excessive scratching can introduce bacteria to the wound and lead to an infection.

Bed bug bites will appear as red blemishes on your skin. Most often, they will be on the areas of your body that were exposed while you were sleeping. With that in mind, bites are particularly common on the back, shoulders and arms!

Adult bed bugs are small, measuring only 3/16-inch long (5 mm). Their bodies are reddish brown, reflecting their diet of blood. These insects have a tick-like appearance and a flattened body.

As a bed bug feeds, its abdomen expands giving the insect an elongated shape. Adult bed bugs that have not fed recently have a rounder appearance. Young bed bugs are often cream colored.

Bed bugs cannot fly and don’t have true wings. Instead, they have wing pads that never become fully functional. They have six legs and a pair of antennae. 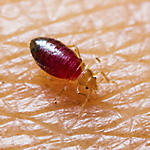 Bed Bug eggs are about 1 mm long and white in color. They hatch about 2 weeks after being laid and begin to feed immediately. The nymphs develop into adults over the course of five weeks, assuming they’re well fed and the temperature is between 65 degrees and 112 degrees. During that time they grow from about 1.5 mm to their full adult size. They undergo this rapid growth by shedding their exterior shells multiple times.

Female bed bugs are a bit longer and wider than males.

The typical bed bug has a six-month lifespan under ideal conditions, which include access to a regular food source, consistent temperatures above 65 degrees and a place to hide when they're not feeding.

Female bed bugs can lay hundreds of eggs in their lifetime. Typically they lay between one and five each day, often in clusters set inside a very small crevice.

Where Do Bed Bugs Live?

Given their name, some people think that bed bugs only live in beds, bedding and mattresses. Unfortunately, that’s not the case. These frustrating creatures can be found in all types of furniture and even in appliances.

Look for traces of them in your sofa, a favorite chair or your computer. Also check between pictures and the walls they’re hung on and inside books. They can even hide inside your clock radio, waiting to climb out each night and take their meal from you.

Since they are so small, you can also find them in the cracks in a wood floor, in and under carpets and inside electrical outlets. Wiring, pipes, venting and conduits can also hide a bed bug population.

CONTROL
COMMON SPECIES
HOW TO GET RID OF BED BUGS