Do you have wasps, hornets or yellow jackets in or around your home? Wasp and hornet spray from TERRO® will help you to get rid of wasp and hornet hives and keep your yard and family clear of these flying pests! 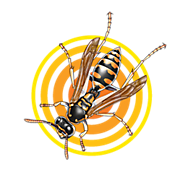 There are more than 30,000 identified species of wasps, but they basically fall into one of two categories: solitary or social. The majority of these wasp species are solitary, and live and operate alone. Examples of solitary wasps are parasitic wasps, which are beneficial insects used in agricultural pest control, and hunting wasps, which hunt spiders and other insects.

There are only about 1,000 wasp species identified as social, yet they are the ones people encounter the most. Social wasps such as hornets, yellow jackets, and umbrella or paper wasps, live and work together in colonies.

Wasp bodies have three segments: the head, thorax and lower abdomen, which is defined by a "waist." The two main groups of hornets are bald-faced and giant. Bald-faced hornets are 1/2" long and giant hornets are about 1" long with whitish and black bodies. While neither type of hornet is aggressive toward people, they will defend their nests if provoked.

Yellow jackets are about 1/2" in length, yellow and black in color, and can be aggressive to people.

Umbrella or paper wasps have slender bodies that are 3/4" to 1" in length, and they have black wings. Body color ranges from brown to reddish-brown, depending on the species.

Wasps have four stages of development: egg, larva, pupa and adult. Social wasp colonies are newly built in the spring. Having survived the winter by hibernating in a warm place, a fertilized queen starts the nest from scratch. In the small paper nest, the queen will lay her eggs as part of the wasp reproduction process.

The first egg hatchings will become a starter brood of adult female workers. The queen will feed and care for these larvae until they pupate.

As adult female workers, they take over building the nest, taking care of the queen and other larvae, foraging for food and protecting the colony. All the while, the queen continues to lay eggs. At summer's end, there will be thousands of wasps in the colony. Males are produced at the end of summer and mate before the colony dies off as the colder weather sets in.

Wasps, yellow jackets and hornets live all over North America in meadows, orchards, woodlands, playgrounds, cemeteries, and urban and suburban settings. All wasps build nests, although they vary in their nesting preferences.

A wasp habitat is a paper-like nest made from wood fibers that have been chewed into a pulp. A yellow jacket habitat is a nest built below the ground surface. On the other hand, a hornet habitat, like a wasp's, is above ground. Wasps and hornets build their large nests in trees as well as manmade structures such as decks, porch overhangs, even attics and house walls.