Leopard slugs, also called great gray slugs or the giant garden slug, are an invasive species to North America, having been introduced here from Europe.

Leopard slugs grow to be about 4 inches long and have a gray to yellow skin that’s peppered with black spots near the head. The spots form stripes along their tails.

Like most slugs, the leopard slug has two retractable eye stalks and two tentacles below them that are used to feel the environment and taste potential food items.

Leopard slugs are common invertebrates in many areas, including fields, woods, lawns and gardens. They prefer to dwell in damp, shady places during daylight hours. Their body is easily flattened to allow them to hide under rocks, logs and other objects.

Leopard slugs need to live in a moist climate or near a water source to survive, which helps explain their fondness for well-maintained gardens.

The leopard slug is native to Europe, North Africa and Asia Minor, but has spread to North America and elsewhere.

This slug, like most slugs, is a generalist when it comes to food, meaning it will eat most plants, whether they are fresh or rotting. They are known to eat tubers, fruits, flowers, ornamentals and herbs. 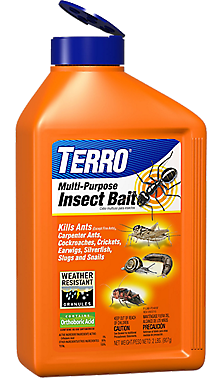 Leopard slugs are considered a major horticultural pest since they are willing to eat just about any plant. They will eagerly eat the leaves and roots of most plants, which often kills the plant.

TERRO® Ant Dust is a simple solution to your slug problems, whether or not you are specifically battling leopard slugs. Just sprinkle this dust along the perimeter of your flowerbeds and in rings around ornamental plants to protect them from these hungry pests.

TERRO® Multi-Purpose Insect Bait and Perimeter Ant Bait Plus are two other effective products to use against slugs. Sprinkle these granules over a flowerbed in the spring and every four weeks thereafter to keep slugs in check.